At the end of another day – Waipoapoa Summit

January 7th we ventured out for some holiday down time at Waimaramara beach as a family.   After fish and chips at the local shop we headed for the countryside to squeeze in a SOTA summit activation.  Warren couldnt let a day’s chance pass him by and he had prepared himself for the chance and made contact with the land owner to gain permission to access the site.

Getting the the property where the summit is located took us via country roads and out into Hawkes Bay farm land.   The track to the summit was a bumpy ride in places with plenty of gates to open along the way.  A 4WD vehicle is certainly a must if you are wanting to visit the summit.

Once near the top we parked the car and walked the last ten minutes following the fence line to the top of the hill.   We were expecting to find the summit by finding the trig at the top but it took some time to find, and discovered it was no longer upright!   Another few surprises awaited as at the top of the hill – A electric fence that was a bit of an art to jump and a dead animal that tingled the nose hairs as it had obviously been there for quite some time and it wasn’t long before we discovered where it lay in the grass on the slopes.

Getting the aerial up was a bit tricky due to the lack of anchoring to get it up and running.   One end in the tree and the other (reel) end anchored around the rocks in the paddock to keep it in place.

As the sun started its nightly decent from the skies Warren went live on the air once more.  Contacts were coming in thick and fast this evening and Warren made 17 contacts including 2 to Switzerland on 14 MHz.

With impressive views all around and a pretty impressive sunset in the distance to top off another great evening on the air. 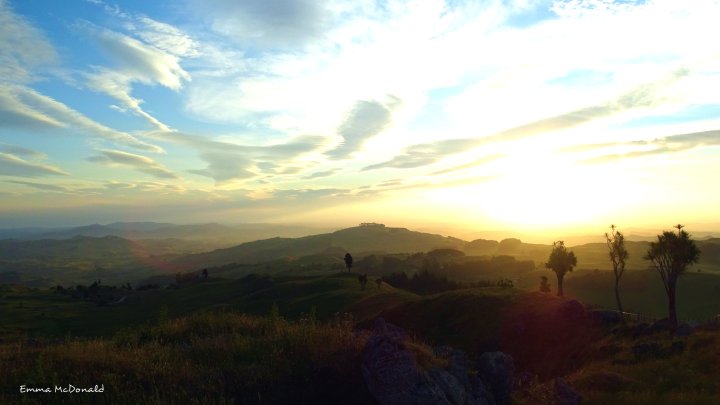 Summit marker – Trig Station has fallen over. Confirm with GPS..

Land access permission – Required. Waipoapoa station is listen in the phone book and the land owners are friendly.