The launch of Zl3 on May 1st 2016 was not something that was on our list of yes we must do’s this year in terms of SOTA activation’s, however when Andrew got in touch and said he was going to be there and invited Warren to join him for a joint activation as ZL3 went live, the opportunity was too good to miss.   Andrew (VK3ARR) and Warren had given up considerable amounts of their time mapping, checking and putting together ZL SOTA and getting everything ready to go live on the air so it seemed fitting that they meet up at last and do this together.   Andrew was in the country (from Geelong – Melbourne, his home town) on business and so met us in Blenheim where we had stayed the night with a friend of Warrens and had dinner with her and another Ham (Paul ZL2RE) from Blenheim who also activated on opening day on another Blenheim summit (ZL3/MB-278).   When they finally came face to face for the first time after months of hard work it was like two old friends catching up as many tales and exchanges had taken place prior to this including each other seeing blog posts from previous SOTA adventures around the world.  Andrew is certainly a seasoned SOTA activator having activated in 15 Entities across 5 continents. 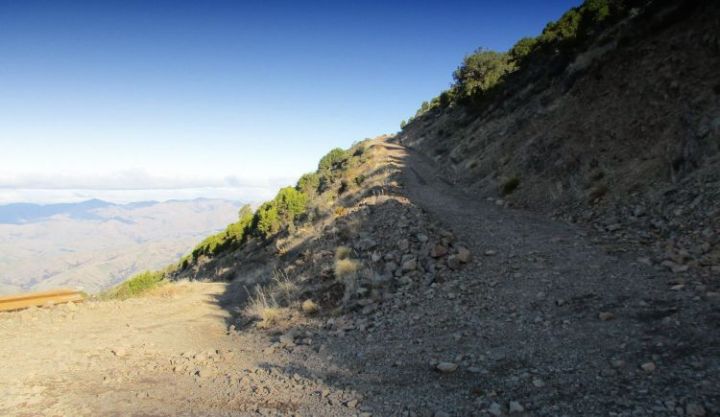 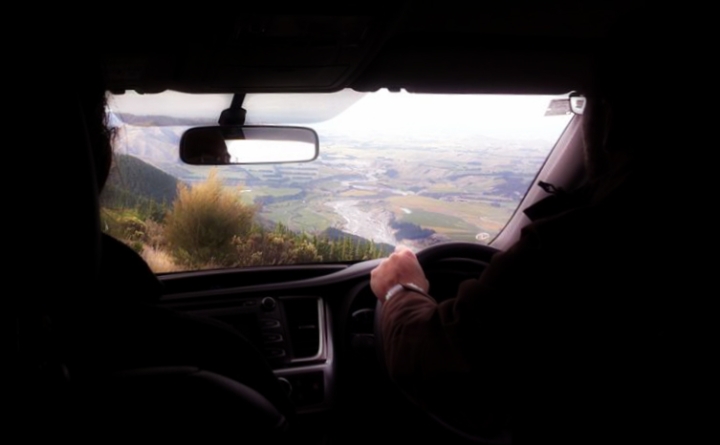 about an hour and half from Bleheim the home / summit of Altimarloch can be located some 1700m above sea level.  Permission for access is required (information for this at the bottom of the blog post) and there is a fairly well maintained 4WD track to the top, although a couple of the corners and pretty tight to maneuver around

We arrived a the summit with plenty of time to get set up and have some lunch before ZL3 went live and contacts could start being made for the log.  We found the distribution transformer activated as a shelter and set up base there and used various constructions to tie things to.

While Warren and Andrew were busy setting up camp for the next few hours i went for a wander around the big open summit and snapped some photos to take home.   The view went for miles, towards the south out into the hills and to the North out over the top of the South Island.   The bottom of the North Island could be seen through the haze way in the distance reminding us that North and South Islands of New Zealand in reality aren’t that far apart.

Being in the South Island and up some 1700m above the sea level on an exposed summit we expected that layers and warmth would be a must, however we were pleasantly surprised to find that the conditions were not as expected and the sun was out a gentle cool crisp breeze but definitely not as cold as was expected.   Once 12noon struck it was all action stations and Warren was up on the air along with Andrew.   SOTA was certainly making its mark today as contacts came in thick and fast from both ZL and VK.   It was great that another South Island summit was being activated (Paul ZL2RE on ZL3/MB-278)  as things went live along with a summit in Wellington being activated by Wynne Zl2ATH– ZL1/WL-138 Mt Lowry.   Andrew ZL3CC – activated from Christchurch summit, Coopers Knob ZL3/CB-806, highest point in Christchurch’s Port Hills, although by then we were on our flights home to Hamilton so couldn’t make contact on the air with him.   Many summit to summit activation’s were made (photos below show Andrew and Warren swapping stations to get those in their logs)

27 contacts were made from the summit by Warren which included 5 summit to summit contacts. It was great to work Wynne activating Lowry in Wellington, and Paul activating Rahotia, both of them activating for the first time.  Warren used a mixture of HF bands and some FM on VHF, but the bulk was on 40m collecting many ZL chasers for the log.

A huge thanks has to go to Andrew for not only his hard work with getting ZL SOTA on the air but for picking us up today in the 4WD and dropping us back to the Blenheim Airport for our return journey home.   Big thanks also to those Hams who were on the air as things went live or were there soon after to collect their points, both as activators and as chasers from various locations.   All in all the launch of ZL3 was a huge success and we certainly look forward to hearing about others SOTA adventures in the South over time.

No doubt this wont be the last joint activation from this pair of HAM’s, even as we packed up and drove home ideas for future activation’s in both ZL and VK were being discussed as possibilities for the future.  Andrew your photos are you their way to your inbox, enjoy and do as you please with them, store them, use them on your blog whatever you choose, just as a little thank you for your time and many efforts.